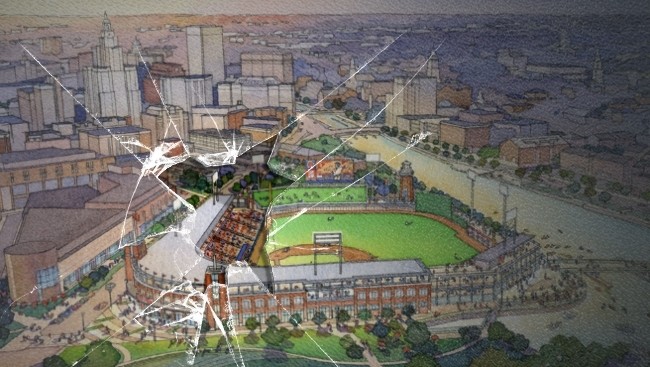 With all the hoopla surrounding the proposal to build a new stadium for the Pawtucket Red Sox, we’re hearing a lot of justifications for picking the pockets of the residents of Pawtucket and Rhode Island. The biggest one being that the deal is revenue neutral to the taxpayer as touted in this exchange with Commerce Corporation board member Mike McNally.

You are assuming it is better to steal money from citizens to fund a private project than to let them keep it and spend it on their own.

As stated in the response, just because there may be no visible loss to the taxpayer, with an emphasis on “may” what this line of thinking ignores is the unseen potential of these funds if left in the hands of the people footing the bill.

In 1850 French economist Frédéric Bastiat wrote an essay “Ce qu’on voit et ce qu’on ne voit pas” which translates to “What is Seen and Unseen.” In it, he explains the parable of the broken window, also known as the broken window fallacy. It’s a simple tale of a shopkeeper who has his shop window broken. In an attempt to calm the angry gentleman, he is told by several people that witness the damage, that all is not lost, there is an opportunity in it for the business that will fix the broken window and this will stimulate trade. Of course, this is the obvious “seen” truth, the shopkeeper must pay to have the window repaired.  But what is not taken into account is what the shopkeeper could have done with the money had he not spent it repairing the window. That money could have been spent on something else that would have had a similar economic impact and he would still be ahead by one window a net gain for the shopkeeper and the economy as a whole.

This same concept can be applied to the stadium. The millions of dollars left in the pockets of the people and businesses will still be used to stimulate the economy except with the added benefit of choice in how it’s spent. Be it purchasing goods and services or starting and expanding businesses that employ more people. The people and economy are still ahead, with the people able to keep their money and spend it instead of having it stolen and spent on something they may not want.

We asked Mr. McNally if he was familiar with this elementary economic idea.

Have you looked at the #'s and know that it does not cost zero? Of course not, just a negative cynic that has not done his homework

It really is a simple concept, it’s also outlined in the first chapter of Henry Hazlitt’s book “Economics in One Lesson

” We’re still waiting for a response from Mr. McNally.

In another example of economic and philosophical ignorance, during a recent call into WPRO, Chairman of the Libertarian Party of Rhode Island was chided by the host, Dan Yorke. To paraphrase Yorke, libertarians don’t understand the value of public-private partnerships. Aside from the obvious fact Mr. Yorke clearly doesn’t understand libertarian philosophy, my response to him is simply, we understand it quite clearly, there is absolutely no value in it at all and it is inherently immoral for the government to take money through threat of force from citizens to fund private ventures.

Mr. Ford went on to bring up several examples of failed stadium partnerships throughout the country only to have those arrogantly dismissed with reference to the ones that “work” and that every other stadium in the country is partially funded by taxpayer dollars. This line of thinking reminds me of something my father used to say when I was young and getting in trouble for something I shouldn’t have been doing while using the excuse of “but Johnny was doing it too.” His response to me as I’m sure many parents have told their children, “If Jonny was going to jump off a bridge would you do it too?”

If the stadium is as great an opportunity as we are being told it is, then finding private investment should be no problem. At which point we will still get the stadium, any economic benefit that it will bring as well as the aforementioned burden being lifted from the citizens of Pawtucket and RI.  But the mere fact that they have to threaten us with leaving to try to force our hand is quite telling, do we really want to do business with an organization that resorts to threats? If that is the case let them go and break someone else’s windows.

Mike founded Liberty RI in September 2014 as a way to bring a libertarian perspective on local issues. A US Army Veteran and reformed neo-con, Mike's journey to libertarian philosophy began with the Ron Paul revolution and catapulted into outright political activism during Bob Healey's 2014 run for governor as a core member of the campaign team. Mike remains active in the political process to this day. He considers Misesian-Rothbardian libertarian and follower of the Austrian School of Economics.