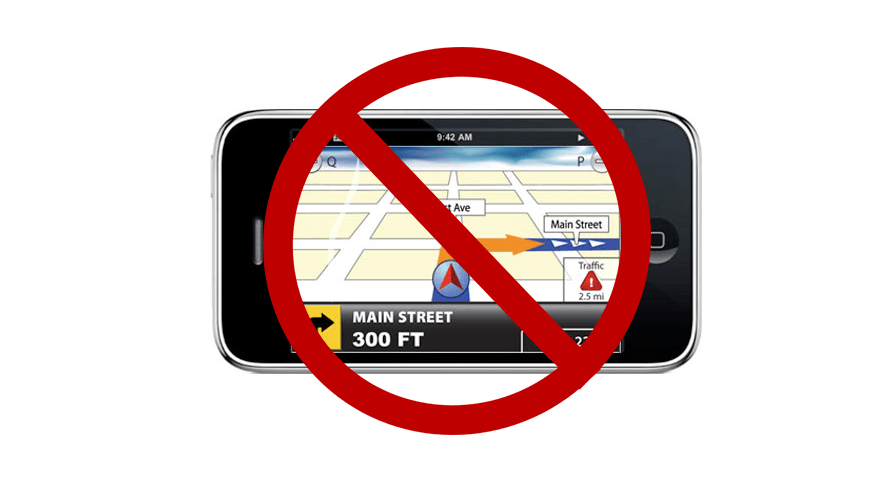 This week, the Rhode Island Traffic Tribunal upheld a ridiculous ruling that includes the use of GPS in a state law regulating cell phone use while operating a moving vehicle.  The law was interpreted to include any use of the cell phone where a person might be looking at the screen instead of the road.  It makes no distinction between texting, and any other cell-phone related distraction (except talking on it, of course, which is still allowed even though it often takes one hand away from steering the vehicle).  I wonder…does rolling my eyes count as a distraction?

Rhode Island is known for having some of the worst roads in the country, as well as some of the worst drivers, which begs the question; do we have the worst traffic laws as well?  Obviously, most of our laws are similar to others around the country.  When it comes to rules and regulations, Libertarians take the view that proof of aggression should be present in order to justify the law.  For example, one clear case of aggressive driving would be tailgating.  But, in some cases, aggression is harder to determine.  Below is a list of six traffic laws in desperate need of change and/or outright revocation, including a couple that are so out of date that they really are just taking up space at this point.

As the new kid on the block, this rule of the road lands at a #6 on the list.  The problem with a regulation that uses “looking at the screen” as its justification is that it doesn’t take into account whether or not the action is truly aggressive.  Certainly, glancing away from the road could put other drivers at risk.  However, does turning your attention away from where you’re going for a second really put others at risk?  How long does it take for an operator to put others in danger?

This seems to be the determining factor in proving aggression on the part of the driver.  After all, we take our eyes off the road to change the radio station, adjust the temperature, read a billboard, apply makeup, or to check one’s speed (ironically).  If looking at the screen of a cell phone while driving, even for a moment, is against the law, then all of these other actions should be against the law as well.  Would that make any sense whatsoever?  Of course it wouldn’t, then again, this is Rhode Island we’re talking about.

A study at the University of Michigan tried to answer the question of how long a person can safely look away from the road without causing significant risk to others.  The study concluded that the so-called “two-second rule” is a good guideline, although it also acknowledges the need for further study.  Glancing at one’s GPS, as well as most of the other actions listed above (with the exception of putting on makeup), do not require more than two-seconds to complete and should not be considered aggressive in nature.  The law regulating cell phone use clearly needs revision.

Now, I know what you’re thinking.  How is speeding a non-aggressive action?  Can we really have roads without speed limits?  Are you crazy?  The answer to those questions are yes…and no (aren’t we all a little crazy?).  Technically speaking, an officer could pull you over and ticket you for going just 1 mph over the posted speed limit.  They don’t, of course.  Why?  Because, if you’re going just 1 mph over the speed limit, there’s a good chance everybody else is going at least 5mph faster than you.  Put more simply, if you’re driving as fast or slower than everyone else around you, are you really driving aggressively?  Are you really speeding?

The quick answer is no.  The velocity at which a car is moving cannot be considered an aggressive act on the part of the driver if everyone else is traveling at the same speed.  In a sense, speed limits should be considered as guidelines.  So, at some point road-safety experts got together and determined what a reasonable speed for any given stretch of road ought to be, which is great.  It’s helpful to know when I might want to drive a bit slower and when I can drive a bit faster.  However, if everyone else around me is doing 80mph in a 60mph zone, there’s really no way an officer could consider anything I’m doing as aggressive or reckless if I’m only going 75mph.

It’s time we change the law to reflect what speed limits really are: suggestions, and nothing more.

Have you ever been stuck at a red light when it was absolutely clear to you that nobody was traveling on the other road?  You’re sitting in your car like an idiot, watching the opposing traffic signal until it changes color, at which point you start creeping further and further into the intersection so that when the light finally turns green, you can feel good about the fact that you shaved a fraction of a second off your travel time.  How ridiculous.  Really, what have we been reduced to?  I’ve almost convinced myself that there’s a bunch of oligarchs watching us on sky cameras like we’re a herd of cattle being prodded along through life with a scalding hot branding iron.  Oh, and they’re laughing, of course, and one of them is wearing a monocle…One of them is definitely wearing a monocle.

There is absolutely no reason why running a red light, in and of itself, should be against the law.  That goes for stop signs as well.  Drivers are fully capable of determining whether or not its safe to pull into an intersection.  Obviously, during peak traffic times, a traffic signal is an important tool and probably increases the rate and efficiency at which traffic moves around.  Otherwise, a quick stop to determine whether it’s safe to cross ought to be sufficient.  All traffic signals should switch from the green/yellow/red pattern to a flashing red pattern during non-peak driving times (similar to a stop sign).

Oh, and all stop signs should be yield signs unless there is a four-way stop.  Have you ever been ticketed for rolling through a stop sign?  Ugh.  It’s the worst.  You get no credit whatsoever for slowing down!  Here you are, operating in a safe and courteous manner towards the other drivers on the road, and it’s like, “Why am I getting a ticket?”  Because the laws are stupid, that’s why.  Stupid laws.  The auto mechanics probably got together and lobbied for these laws long ago so they could do more brake jobs.  Stupid auto mechanics.

#3  Testing the Speed of a Horse

Yes.  There is actually a law for this.  Still on the books.  I kid you not.  RI General Law 11-22-11 states that, “Every person who shall drive any horse over any of the public highways, for the purpose of racing or trying the speed of the horse, shall be fined not more than twenty dollars ($20.00) or imprisoned not exceeding ten (10) days acheter viagra avec paypal.”  WHAT?!?  I mean, I’m not even going to say that this should be allowed, but why is this law taking up space?  And does this mean I can ride a horse on a public highway as long as I’m not racing or testing its speed?

When you think about it, it really is a complete waste of paper and ink.  And why isn’t Sheldon Whitehouse outraged over this kind of blatant disregard for our natural resources?  I want a speech, on the Senate floor, by the end of the month on this issue, Mr. Whitehouse.  We don’t need to be wasting perfectly good ink and cutting down trees to accommodate these ridiculous laws.  I’m setting my DVR to continuously record C-Span.  I better see a floor speech by Halloween.

#2  No Dog Sleds or Carriage Races

Again…WHAT?  Take palm, open it up, and insert face.  Here’s another law that is taking up valuable real estate.  RI general law 11-22-9 states that, “Every person having charge of any wheel carriage of any kind, or sled or sleigh, with any kind of team, who shall negligently or willfully let the team go at large in any highway, shall be fined five dollars ($5.00).”  Wait a second…so, does that mean…Santa Claus is BANNED from Rhode Island?!?  Sorry kids, no gifts this Christmas, The Rhode Island State Police ticketed Santa and his reindeer for breaking the law, which cost him precious time in delivering presents, so he’s going to have to skip Little Rhody this year.

And I guess this means the chances of bringing the Iditarod to Rhode Island are slim to none?  Damn, just when our economy could really use a boost.  I guess we’ll have to continue to rely on yacht racing and comic book festivals to bring economic activity into our state.  I guess there’s not really a big difference between seven or eight people dressed up like wookies running around the convention center and watching a dog sled race, but I can still dream, can’t I?

The granddaddy of anti-libertarian traffic laws, the mandatory seat-belt rule is perhaps the stupidest law on the books.  Don’t get me wrong, I can appreciate the intention behind it.  But, as is the case with most progressive laws, good intentions don’t justify aggressive acts on the part of government.  The ends don’t justify the means.  There is absolutely no reason why the government should be forcing people to wear seat-belts.  Is not wearing a seat-belt going to affect anybody else but me?  It’s my life after all, at least, in theory anyway.  I’m pretty sure the powers that be are either indifferent or outright opposed to the idea of individual sovereignty at this point.

So why does this law exist anyway?  To protect us?  Personally, I always wear at seat-belt when I’m driving, but that’s really not the point is it?  When it comes to legislating personal safety, we can assume that whatever law our representatives are cooking up, it is going to violate our freedom to risk our own lives if that’s what we want to do.  Nobody on the road today is unaware of the benefits of wearing a seat-belt, so if they decide not to wear one, exactly who do our legislators think they are in forcing them to do so?  Clearly, the driver in question isn’t too concerned about it and there’s no reason anybody else should be.  So mind your business why dontcha!

So there you have it.  Six really, really stupid laws.  Is there anybody on Smith Hill who can do something about this?  Anybody?  Bueller?  Bueller?  Filippi?