An Assembly that knows no bounds. 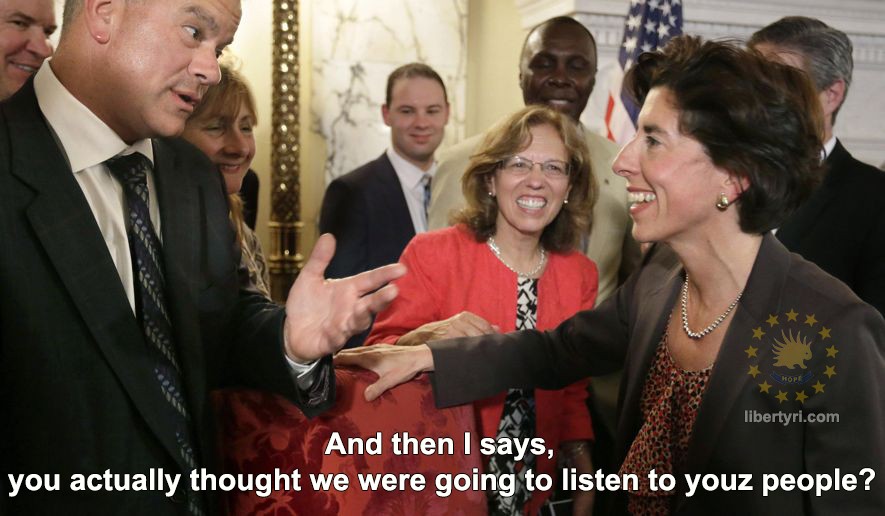 We’ve known for years that our representation within the State of RI is lacking.  Corruption and shady backroom deals being the norm. Typically, our politicians go behind our backs to get their dirty business done, at least for the most part. Even Governor Raimondo knows this, as she said last year

However, in recent months, there seems to be a trend, confirmed by the passage of the RhodeWorks Bill, they don’t care about hiding it anymore. It seems we’ve reached a tipping point where the legislature is blatantly going against the will of the people and doing whatever they want with no regard for your input. You are nothing more than a mere inconvenience and if you happen to be one of the few legislators that dare listen to their constituency, Speaker Mattiello will make you pay as he did to those that dared oppose his will and voted “no” on the RhodeWorks Bill, From GoLocal Prov:

So how do we change it? Well, this bill is an example of how the game is played. It’s obviously a payback to the labor unions that helped get Gina Raimondo elected, It also has the effect of building an infrastructure that with the flip of a switch can become an ATM machine for the General Assembly. We all know that come November everyone will have calmed down and with the labor unions paid back and a few senior citizen spaghetti dinners, they will be back in office.

Or will you remember? What are you going to do to step up and put them in their place? We have big plans here at Liberty RI to keep track of the misdeeds of our elected representatives. Be sure to sign up for our newsletter to stay in the loop.